What programming languages are used in China and Russia?

posted on May 29, 2021 under The Best Hosting Companies, Shared Hosting, Reseller Hosting, VPS Hosting, Dedicated Servers
tags Web Design Web Hosting Programming HTML Russia China
There is at least one somewhat popular Russian-only programming language. It’s the programming language of 1C: Enterprise (1C: Предприятие) - a Russian development platform used for the fast creation of customizable business automation software. It is the most popular platform of its kind in Russia and some other Russian-speaking countries. Consequently, knowing the 1C language is a required skill for certain types of Russian programmers and IT specialists.

The 1C language allows using both Russian and English keywords, but the Russian ones are the default ones, making a program in the 1C language instantly recognizable. Conceptually, it is similar to languages like С and Java.

Otherwise, Russian programmers use the same internationally popular programming languages and frameworks as everybody else.

Picture - A part of a program written in the 1C programming language. 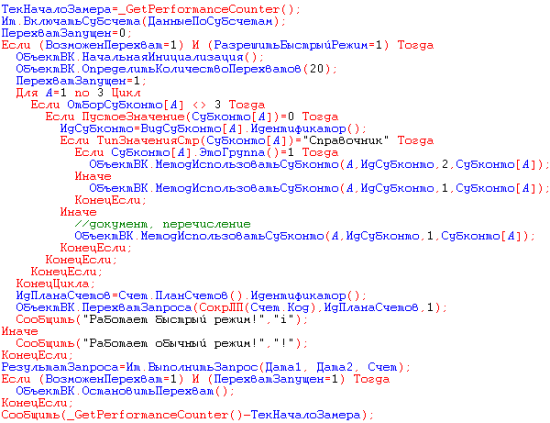